The Story of How Many Thousands of Men and Women Have Recovered from Alcoholism (generally known as The Big Book because of the thickness of the paper used in the first edition) is a 1939 basic text, describing how to recover from alcoholism, primarily written by William G. “Bill W.” Wilson, one of the founders of Alcoholics Anonymous (AA). It is the originator of the seminal “twelve-step method” widely used to treat alcoholism with a strong spiritual and social emphasis.
It is one of the best-selling books of all time, having sold 30 million copies. In 2011, Time magazine placed the book on its list of the 100 best
and most influential books written in English since 1923, the year in which the magazine was first published. In 2012, the Library of Congress designated it as one of 88 “Books that Shaped America.” (taken from Wikipedia)

CLICK HERE TO CONTACT US
Feel free to contact us for any reason. We encourage you to report meeting changes or inaccuracies. You can also call the hotline at 717-394-3238. Changes will be reflected on the Meeting Guide App.

Unity in the Community Campout

Sunlight of the Spirit Conference- York

Download The Meeting Guide Cellphone App To Find Meetings Near You 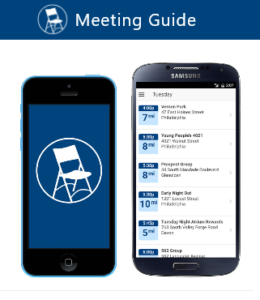